Have you ever wondered what is GDP? 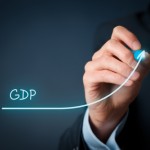 The GDP definition is the monetary value of all the finished goods and services produced within a country within a period usually one year.

What might be a better question is what is GDP used for.  GDP statistics is useful to a country in indicating the level of the living standard, in comparing the performances of different economies at a given time. GDP is not a comprehensive measure of the production process but measures the final value of a product or the value added to a particular product at every stage of production. This is so to avoid double counting during the computation process. For example, a farmer produces maize and sells to a flour firm at $50 per kilogram. The firm produces flour and sells it to customers at $ 80 per kilo. The absolute measure of the particular activity will be $(50+80=130), but the final value of the similar process is $80. The value added on the maize to make it flour is $(80-50) =$30; therefore, the total value added in the whole process is 50+30=80 equivalent of the final value of the same production process. Comparing the two values 130 and 80 we have got a difference of $ 50 and this is due to double counting. Therefore, so as to avoid such incidences we use the final value of the product or we add up the value added to that particular product in every stage of production.

GDP can thus be said to be the value added to a product by the different institutions that engage in the production process from stage one to the final phase where the product is said to be ready for consumption.

- GDP it’s an indicator of the economic growth of a given economy from time to time.

The formula for GDP calculation keeps on changing from time to time due to various reasons. The value added by firms during the production process it’s easily computed from the data records but the value added to some products by some of the institutions in the economy is not easily calculated. Think of calculating the value added to a person who was sick and after receiving medication from a doctor he/she recovers. Such activities aren’t easily computed in monetary value, and they pose a challenge in the computation of GDP.

GDP it’s calculated using three ways of which all should give a closely related answer.

It’s the commonly used method and the simpler one. Using this method, the final output of every sector of the economy is added to get the GDP. We add the last value of the products to avoid double counting. We can as well add up all the value added to every product in every stage so as to come up with the GDP. To get the gross value added, we take,

The addition of the gross value added in all the different sectors of the economy is known as GDP at factor cost.

Taking the data of sales from the different areas and adding it up.

Using this approach, GDP is computed by adding up all the income earned by firms and households within a year. Such income is regarding rewards from the factors of production which include

Adding up all the above incomes gives us GDP statistics.

Using this method to get GDP, we add up all the expenses on final goods and service in a year. Such expenditures include expenditure on consumable goods, expenditure on investment, government spending and net export.

Adding up all the above expenditures we get GDP

All the above three approaches give us similar figure with slight differences due to statistical reasons.

What is GDP per capita?

Having understood what GDP is and how we can measure GDP it’s easy for everyone to understand and compute GDP per capita. GDP per capita is GDP per head. It’s the amount produced by each within the economy. Total GDP divided by the total population gives us GDP PER CAPITA.

The result is GDP per capita in one year.

There can be a case whereby the GDP is very high but GDP per capita very low. This is possible in an environment where most of the production firms are owned by very few people in that economy hence most of the population living below poverty level.

What is nominal GDP?

Most countries their currencies aren’t stable hence inflation is prevalent in those economic systems. Inflation is the ability of money to lose value. GDP where inflation has not been accounted for its known as nominal GDP. You can have a high GDP but comparing the value of the currency in those two periods being not the same. So for any economic region to be able to use GDP statistics in comparing the living standards or levels of growth in a different period has to cater for the inflation that might have taken place.

- Different goods that are consumed in various economic regions, lack of common goods in the different economic regions offers a challenge in the computation of GDP using monetary value of the products.

- When using the total gross domestic product instead of GDP per capita in comparing the living standards of different economic regions we tend to make wrong conclusions because the high GDP from a particular industrial area may be contributed by very few people within that region hence giving a false impression of the living standards of those people.

What is real GDP?

This is a macroeconomic measure of the economic output that can be adjusted for price changes. This adjustment can transform money value rule into an index for quantity of total production. Therefore, if you want to get the inflation rate, you have to subtract it from the GDP to get the real growth percentage.

US has resulted in analysis of the GDP In quarterly basis with the recent being a record of 2% increase low than the previous one that was 2.1% but higher than 1.9% that is the market expectation growth rate. This was as a result of higher household spending among other activities

LIMITATION UF USING GDP AS A MEASURE OF QUALITY OF LIFE

We have several factors that influence the living standards of individuals but not included in the computation of GDP include:

- Environmental factors; the environment from which an individual lives matters a lot in the determination of his/her living standard. GDP can be high, but the environment surrounding the people is very much polluted hence not conducive to human health.

- Quality improvement; quality of products increase day by day, using an example of cell phones. Motorola C 111 doesn’t serve a person the same way techno p5 can do. The value of the two products may be the same but service is different. With GDP computation procedure only the value of the product matters and not the service to the consumer.

- Underground economic activities, GDP computation process, includes only the legal and recorded transactions. The illegal activities do not appear in this process. Such activities may be contributing positively to the living standard so the individuals so when left out, the GDP statistics may be misleading. Subsistence sectors of aren’t included in the computation of GDP either.

GDP has a greater indication of the whole economic system of any country. With a higher GDP per capita will mean there is low rate of unemployment in that economy, low illiteracy level, little insecurity, and low poverty level, etc.

Although GDP statistics is very useful in different areas as we have seen, people should not rely on such information 100%. There some limitations of using this information in drawing conclusions of a productive lifestyle. Some of the limitations are the ones discussed above.